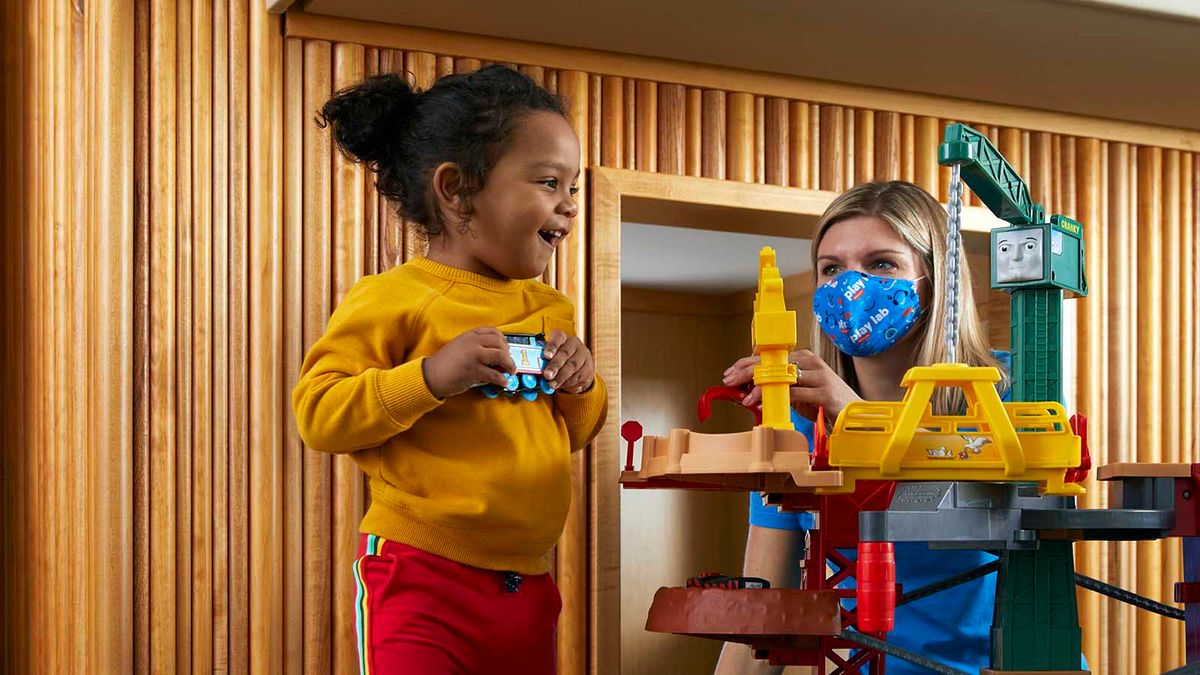 Kids are the toy experts at Fisher-Price Play Lab

Have you ever wondered what makes a good toy? So did Herman Fisher, who co-founded Fisher-Price Toy Company in East Aurora, New York in 1930. The son of a preschool teacher, Fisher got into the habit of watching children play with toys so he could fine-tune toys and see first-hand how kids reacted to its changes.

In 1961, he formalized this practice by creating a Children’s Research Center on site. It was the first such facility in the toy industry, and it is still in operation as the Fisher-Price Play Lab in East Aurora.

Each year, more than 2,800 children and 1,800 parents donate their time to play with new toy concepts or reinvented classics. Meanwhile, child development experts are trying to figure out what kinds of toys spark fun, stimulate learning or improve mental health.

“The Play Lab’s goal for every baby toy or gear or content we offer is to provide the best possible play experience for the families they are intended for,” says Lohiser.

There’s a lot of research and development behind the scenes before an idea turns into a toy on store shelves – a process that takes around 12 to 24 months, depending on the complexity of the toy.

Each toy begins with brainstorming and ethnographic research before moving on to concept drawings. Children are encouraged to test the toys from the prototype phase. Fisher-Price’s team of early childhood development experts, designers and engineers then observe as children play, uncovering critical details such as the size of this dinosaur’s mouth, what shade of purple is the catchiest and what sounds keep little fingers holding on pressing the keys. .

The team also takes into account details such as the intuitiveness of the buttons, the ease of grip for small hands, the rhythm of the music, etc.

At each stage of the journey, the toy concept or prototype is revisited and evaluated by Play Lab experts. “We could show parents concepts to get their feedback, or we could do competitive testing to move on to the next thing,” says Lohiser. “We are looking at the [children’s] play patterns and as we watch them and learn what they like, we iterate on that design and then test it again.”

A single item can be tested multiple times in the Play Lab, “and we monitor it every step of the way,” she adds.

For example, Meditation Mouse, one of Fisher-Price’s newest toys, was originally designed to help children ages 2 to 5 relax at bedtime. Researchers noted that families used the toy with their toddlers during the day as well as for calming meditation and mindfulness activities. So before Meditation Mouse hit store shelves, its exercise duration, cadence, and speed were tweaked to optimize it for day and night use.

“I can’t think of a time in my 13 years [at Fisher-Price] that the first model or prototype of a product was presented to a child and something didn’t change,” says Lohiser. “We are constantly learning from children.

The Play Lab has come a long way since Herman Fisher started watching children play in his office. In 2021, in honor of the Play Lab’s 60th anniversary, the physical space was renovated, including updates to the four research spaces within the lab. These spaces include:

“Obviously the babies couldn’t talk yet, but [the technology] told us that they were starting to make the connection between what was being pushed and what they were hearing. It shows that they are starting to understand the lesson and the learning is starting to happen,” says Lohiser. “Eye tracking actually allowed us to say yes, in fact, playing with the Linkimals fostered learning in those early childhood years.”

There are approximately 10,000 families in the Fisher-Price Toy Tester database. Once families are entered into the database, they remain there until the children are approximately 10 to 12 years old. Most toy testers for Fisher-Price products are between birth and 8 years old. Occasionally, the Play Lab will test some products designed for older kids from its parent company, Mattel.

Fisher-Price seeks volunteers to be toy testers through social media broadcasts, local advertisements and local events. The vast majority of its testers are in the East Aurora area. But more recently, thanks to increased interest in video conferencing, Fisher-Price has embarked on more toy and product testing at home.

“What’s really exciting is that we’re starting to open up that database so we can be on a more national level,” Lohiser said. “So we have parents from all over the country who can participate virtually.”