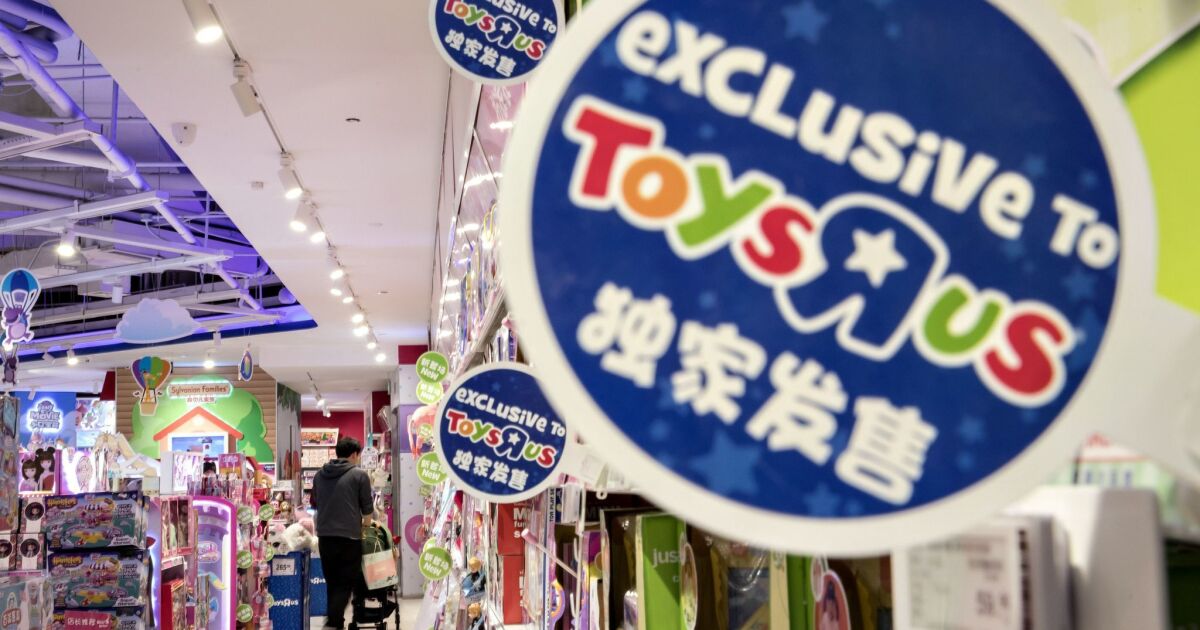 Toys R Us outlets are closed in the United States, but the brand’s stores are still a popular destination for Shanghai resident Pan Wei. A 35-year-old manager for an entertainment company, Pan does most of his shopping online but prefers physical stores when buying toys for his daughter.

“When it comes to children’s products, we want to make sure they’re safe, so we prefer to go to toy stores,” he said.

More than a year after the New Jersey-based chain filed for bankruptcy, forcing the closure of hundreds of stores and the layoff of 33,000 workers in the United States, Toys R Us Asia is alive and well. Last month, a group of Toys R Us creditors reached an agreement with the retailer’s Asian partner, Hong Kong-based Fung Retailing Ltd., to share control of the company’s stores in China, Japan and Asia. from the South East.

Other international brands are also betting that Chinese consumers are ready to visit physical stores with their children or grandchildren. Favorites such as Lego Group and FAO Schwarz are among those targeting China’s toys and games market, which will be the biggest in the world by 2022, according to Bloomberg Intelligence.

Toy sellers are counting on changes in Chinese politics and society to help them gain a foothold in the world’s most populous country. President Xi Jinping’s government ended the one-child policy in 2016 and is taking steps to encourage women to have more children. In addition, product safety scandals in China and the notoriety of counterfeit products have prompted parents to spend more on Western brands they perceive to be safer.

Toys R Us Asia plans to open up to 50 stores next year in China. It’s a big vote of confidence in brick-and-mortar retail at a time when the growing popularity of e-commerce competitors has contributed to the failure of Toys R Us in the United States.

“We’re different from the rest of the Toys R Us world,” said Andre Javes, president and CEO of the Asian company.

Net sales for China and Southeast Asia were $375 million for the year ended January 28, 2017, up approximately 3% from the prior year , based on the company’s latest available regulatory filing. Sales fell 3% in the United States during this period.

FAO Schwarz, the New York toy store where Tom Hanks danced to a floor piano keyboard in Penny Marshall’s 1988 film “Big,” is planning its China debut in the new year. After closing its Fifth Avenue flagship in 2015, FAO Schwarz returned to New York in November with a boutique at Rockefeller Center. Early next year, owner ThreeSixty Group Ltd. plans to open a store in Beijing near the 3rd ring road of the Chinese capital which will be larger than that of Manhattan.

ThreeSixty is partnering with Hong Kong-listed Kidsland International Holdings Ltd. on the Beijing store, targeting China as part of a strategy to leverage FAO Schwarz’s reputation as an interactive destination for tourists and the buyers.

“Chinese consumers, and especially millennials, are looking for more than just buying an item off-the-shelf,” Jan-Eric Kloth, chief operating officer of ThreeSixty, said in a statement. “They want to be engaged and entertained.”

Danish toymaker Lego is taking a similar approach with outlets where Chinese children can play with the plastic bricks rather than just looking at them in the box. The company has 55 stores in China, including a flagship store that opened in central Shanghai in September. Lego plans to add 80 next year, according to spokesman George Yang.

Lego’s revenue fell in its established markets in North America and Europe in 2017, but saw double-digit growth in China.

However, a famous Western name does not guarantee rapid growth in the Chinese toy market.

C.banner International Holdings Ltd., a shoe company based in Nanjing, central China, agreed to pay around $125 million in 2015 for Hamleys, the British toy retailer. Three years later, the company operates over 120 stores globally but only three stores in China.

A high-profile flop for the industry came in 2011, when Mattel Inc. closed a six-story, 37,700-square-foot Barbie store in Shanghai, just two years after it opened. Mattel’s international net sales fell 18% in the third quarter, mainly due to weakness in China. Chief Financial Officer Joseph Euteneuer said in an October call with analysts that Mattel had a “self-inflicted” excess inventory resulting from a misinterpretation of Chinese demand.

“Matel’s experience in China illustrates the difficulty that Western-branded toy companies have still had trying to break into the world’s second-largest toy market,” BMO Capital Markets researchers led by analyst Gerrick Johnson wrote in a report from October 29.

Toys R Us Asia is optimistic about the Chinese market, where its stores are generally smaller than those operated by its parent company in the United States. Instead of big-box stores averaging around 45,000 square feet, the chain’s Chinese locations average 10,000 square feet and are located in malls, Javes said.

In China and other parts of Asia, “people go to malls for entertainment, to eat, to socialize,” he said. “It makes us convenient for people because we are where they are going.”

Einhorn and Wei write for Bloomberg.