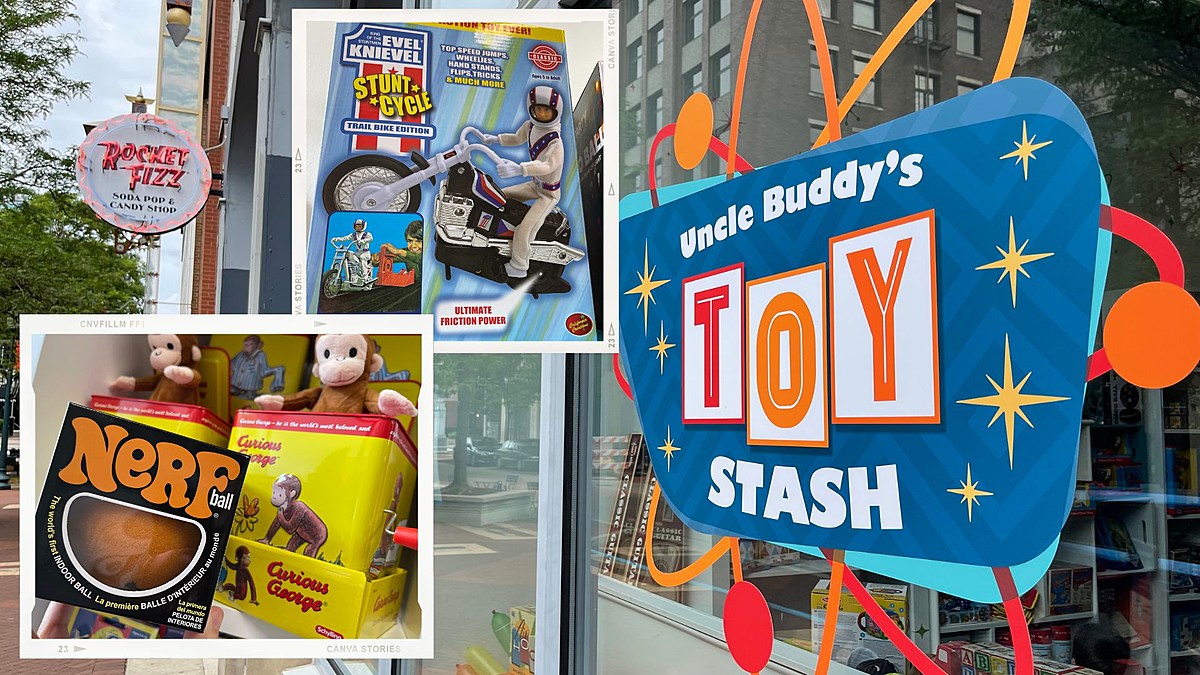 Vintage Toy Shop opens in Kalamazoo next to Rocket Fizz

For years in Kalamzoo, if you felt like being a kid again, Rocket Fizz Soda Pop and Candy Shop on the Mall were the place to go…and still are. But now there’s an added bonus that will make you forget which decade you really are in.

Uncle Buddy’s Toy Stash had its grand opening on Friday, June 3, throwing back time, even for older generations, to an era of wooden toys, pedal cars and Evil Knievel.

For those who didn’t know, Nerf wasn’t always about foam dart guns with suction cups. It all started… with a ball. The world’s FIRST indoor ball, proving that “YES MOM…you CAN play ball indoors!” Launched in 1969, it’s something many babies of the late 60s and early 70s will remember marketing (especially when they teamed up with Kool-Aid and The Monkees!)

The store also offers a mix of new and old, combining the classic Jack in a Box with the more modern Curious George character from the books.

Most likely the only people who LOVE this aisle would be musicians or kids whose parents are musicians. Classic jaw harps, recorders and maracas were big toys in the 70s, much to the chagrin of parents who just wanted some peace and quiet. Nonetheless, many kids loved them, and so, they have a home on the shelves at Uncle Buddy’s.

This is quite possibly the most FAMOUS celebrity toy from the 1970s, Evel Knievel’s stunt cycle. Released in 1973, this cycle of liquidation stunts would set you back $39.99 sold, which in the 70s was pretty much your entire Christmas budget. But it was worth it. MILLIONS of these toys were sold in the 70s, and its memory and popularity were so strong that it was put back into production in the 2000s.

One of the great things about Uncle Buddy’s Toy Stash is that you can also PLAY with the toys, demonstrated here with the classic stunt cycle.

something for the girls

It might be a little cliché, but there’s a touch of pink in store for girls. Before the 2000s, dolls were expensive items, and none were more popular than those whose eyes actually moved when you put them down. Complete with all the doll accessories you could want, any child wanting to take the first steps in learning child-rearing would benefit from having one of these dolls to play with again.

There’s a WIDE range of classics on the shelves here, including Turn a Phrase, The Alphabet Game and classic checkers/backgammon. There are also a ton of newer card games, including “The Epic Beard” game, and some of your other favorites. Definitely enough here to host a pretty epic game night at home.

Really, if you EVER played with a toy as a kid, chances are you’ll find some form of it at Uncle Buddy’s. Pedal cars, Spud Guns, Sock’em Boppers, action figures, robots that follow the lines you draw…really, it’s a “cornucopia” of fun, and a great way to get back in the game. time – if only for a little – and remember when times were much simpler.

You might even give your kids or grandkids a glimpse into your past with some of the classics here.

This Grand Haven second-hand toy store, “Toys Are Used,” has everything you could imagine.